The cyber department of Ukraine ‘s Security Service (SSU) dismantled a gang that stole accounts of about 30 million individuals.

The cyber department of Ukraine ‘s Security Service (SSU) has taken down a group of hackers that is behind the theft of about 30 million individuals. The gang was offering the stole accounts for sale on the dark web, according to the SSU they earned almost UAH 14 million from the sale.

They gang was received money through electronic payment systems YuMoney, Qiwi, and WebMoney, which are prohibited in Ukraine.

The cybercriminals harvested credentials and sensitive data through malware infection, it focused on systems in Ukraine and the European Union.

The main customers of the gang were pro-Kremlin propagandists who used the compromised accounts in disinformation campaigns aimed destabilize the political contest in countries Ukraine and other countries.

“Their “wholesale customers” were pro-Kremlin propagandists. It was they who used the received identification data of Ukrainian and foreign citizens to spread fake “news” from the front and create panic. The goal of such manipulations was large-scale destabilization in countries.” reads the press release from SSU. “It was also established that hacked accounts were allegedly used on behalf of ordinary people to spread disinformation about the socio-political situation in Ukraine and the EU.”

“Currently, the organizer has been notified of the suspicion under Part 1 of Art. 361-2 (unauthorized sale or distribution of information with limited access, which is stored in electronic computing machines (computers), automated systems, computer networks or on media of such information) of the Criminal Code of Ukraine.” concludes the SSU. 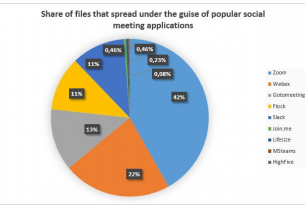